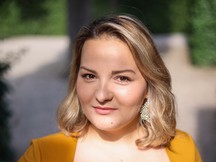 We are delighted to enter into the collaboration with the most promising soprano Juliette Chauvet.

Born in Avignon, Juliette Chauvet studied in Lyon, Paris and Berlin before passing her Bachelor of Art at the Vienna Music and Art Private University. She was artist in residence at the "Centre de Perfectionnement Plácido Domingo" at the Palau de les Arts in Valencia and at the "Pôle lyrique d'excellence" in Lyon. In 2022 she joined the prestigious Music Academy of the West in Santa Barbara. On opera-stage she has also appeared as Donna Elvira (Don Giovanni) and Elle (La voix humaine) a. o. Her opera-repertory, however, also includes roles such as Susanna and Contessa (Le Nozze di Figaro), Agathe (Der Freischütz), Marguerite (Faust), Micaëla (Carmen) and Rusalka (Rusalka). In addition to her native language French, Juliette Chauvet also speaks fluently English, German, Italian and Spanish.